Repsol improves process economics "by 10s of €m per year"

During process design there are many trade-offs to consider. Some equipment decisions may improve the economics of the equipment being considered but have a negative impact on the economics – as well as the operability – of the plant as a whole.

By considering the entire plant – reactor plus separation section – simultaneously during design it is possible to take decisions that result in the overall best economics.

PSE worked with Repsol to optimize the initial design of a propylene oxide plant that comprises a complex multitubular reactor and a separation section with many distillation columns (one an azeotropic distillation and two involving reaction), plus large recycles.

The complexity of the reactor and the separation flowsheet combined with the number of optimization decision variables meant that this could not be attempted using traditional simulation methods.

The traditional SM/PO technology, which co-produces styrene monomer (SM) and propylene oxide (PO), is a mature technology that involves a complex process and large capital investment. A big disadvantage for PO producers is the strong dependence of its economics on the variable styrene monomer market.

Repsol's policy of diversification led the company to initiate a research project to explore new technologies for the production of PO on its own via the epoxidation of propylene using hydrogen peroxide. Success of this research project led to the development of a commercial-scale process for the production of several hundred thousands tonnes per year of propylene oxide.

The Repsol Hydrogen Peroxide to Propylene Oxide (HPPO) process has a number of advantages over the SM/PO process. In particular it is simpler, with a lower capital investment requirement and reduced quantities of byproducts.

Development involved a significant experimental phase, including the construction and operation of dedicated pilot plants. Experimental data was used in conjunction with design and optimization models.

A high-fidelity simulation model was built of the integrated reactor and separation flowsheet, using PSE's AML:FBCR multitubular reactor models and steady-state distillation library. This was then optimized, using an economic objective function that represented annualised capital plus operating cost.

The optimal design represented an increase in total annualized profit of several tens of millions of Euros per year, primarily due to large savings in operating and capital cost.

Two columns were eliminated entirely from the separation section, with the elimination of one column saving approximately €5m/year. In addition, heat integration yielded significant operating cost savings with attractive return on investment; payback was less than four months.

In addition to delivering an economically-optimal design, the project proved, for the firt time, that:

Though the case presented here involved process design, the methodology applies to both design and operations. In fact, the rigorous models used for conceptual design are also suitable for detailed engineering and operation stages of the project.

The methods used in this design are suitably general to be able to be applied to any process plant and are available via PSE's Consulting service. 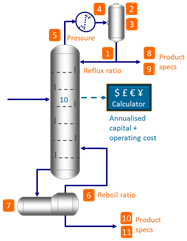 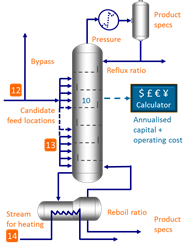