Many layers of protection prevent hazardous conditions arising in Oil & Gas processing plants. The pressure relief and blowdown system and its associated flare network is usually the final safeguard.

Within this context it is imperative to ensure that the flare system has enough capacity to handle the large amount of material that must be disposed of in a short transient period of time. Read our case studies to see the impact of high-fidelity modelling on real projects.

A key challenge in assessing the safety of existing flare systems – for example for process or facility enhancement – is to determine the true capacity of the system.

The only accurate and safe way to determine actual capacity is to model the dynamic behaviour of the facility during the critical pressure relief and blowdown cases: for a high pressure Oil & Gas plant this will usually require assessment of either a blocked outlet case or a full plant blowdown.

Consider the oil and gas facility shown below. It is connected to a relatively large flare system that provides for over-pressure protection and facility depressurization; there are over 200 connections to the flare system in the form of blowdown valves, control valves, bursting disks and PSVs.

For a full plant blowdown operation the facility is isolated into 32 high and low pressure segments which are then depressurized in sequence. A key constraint for the blowdown operation is the flaring radiation limit which translates to a maximum permissible flare tip flowrate.

All blowdown segments and flare network are solved simultaneously. The effects of the staggered blowdown can be seen in the plot below.

The blue line shows the flows entering the flare system at the various sources, in sequence. It also represents the flow that would be seen at the flare tip if a pseudo-dynamic approach is taken (i.e. an approach that considers time-varying flowrates, but does not take into account system holdup). 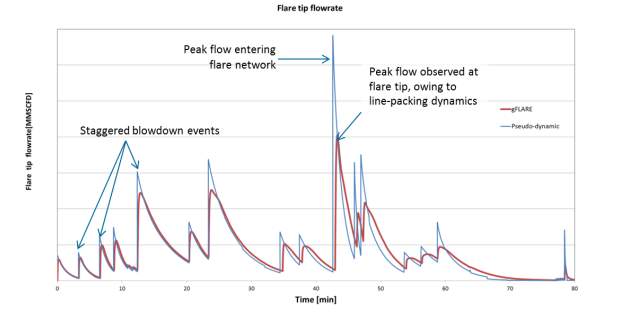 Inlet and outlet profiles over the duration of the staggered blowdown

The red line shows the actual flow observed at the flare tip. This shows the advantages of taking into account the dynamics of the system, in addition to the effects of staggering blowdown:

The net effect is a significant decrease in the flow seen at the flare tip, to about half the rate that which would be predicted by less accurate design methods. This demonstrates that:

A blockage on the gas outlet line from an oil and gas processing facility is generally one of the critical pressure relief scenarios and thus requires careful consideration. For some facilities this is the maximum credible case and thus determines the required flare system capacity.

Typically following the blockage on its gas outlet line, pressures in the facility can be expected to rise until the over pressure is detected and the inlet valves are shut and the facility shutdown.

To analyse the actual performance of the pressure relief system and the capacity of the flare system during such a scenario, a rigorous dynamic flare system model must be coupled with a dynamic model of the process.

The following figure shows the behaviour of the flare system as the gas outlet line from a gas plant is blocked at a time of 5s; 27.2s later a pressure shutdown [high] alarm initiates the shutdown of the facility: the inlet valves start to close and the compressors are shutdown. 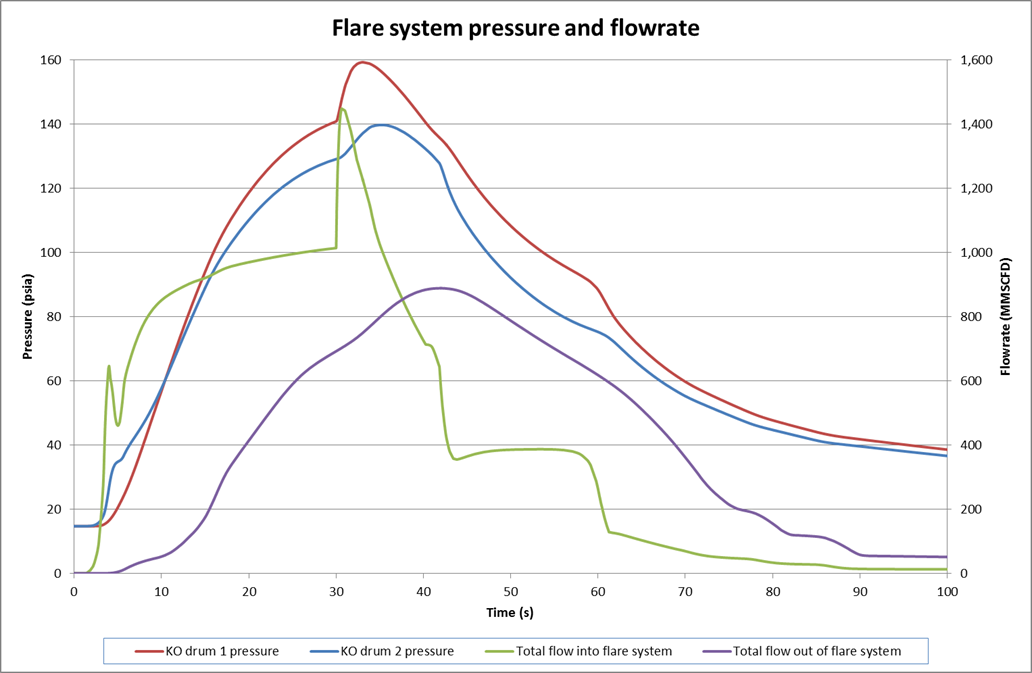 In this case it can be seen that that:

The use of a rigorous model-based safety approach based on our gFLARE technology and coupled process and flare network models can result not only in improved process safety but also an improvement in operations and a considerable reduction in CAPEX. 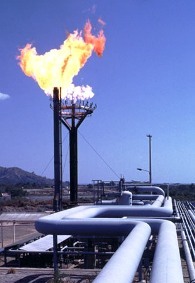 How much spare capacity do you actually have in your flare system?