LG were aware not only of the potential for modelling to deliver major capital and operational savings, but also of the challenges of modelling the multitubular reactor at the heart of the process.

The key objectives for the project were to:

Terephthaldehyde (TPAL) is a promising intermediate for various kinds of polymer, such as liquid crystal, electron conductive polymer and specialty polymer fibres, as well as the starting material for fine chemical derivatives and flourescent whitening agents.

However, despite the extensive possibilities for application of TPAL, its range of use is limited by its price.

The process involves the relatively straightforward selective oxidation of p-xylene to TPAL. However because the current production process involves Cl2 and HCl (Fig. 1), it presents costly environmental challenges.

Multitubular reactors are widely used throughout the chemical and refining industries for fixed-bed catalytic reactions. However, their behavior is highly complex, with good design and operation difficult to achieve.

The TPAL reactor (Fig. 3) contains thousands of catalyst-filled tubes within a shell in which cooling fluid circulates. The reactions in the tube catalyst beds are exothermic, with the reaction rate heavily influenced by the local temperature.

A good design is achieved by adjusting key aspects of the shell and tube bundle geometry to provide optimal heat control in the shell-side fluid and thus eliminate the danger areas where hotspots (areas of significantly higher temperature than their surroundings) can occur.

Because of the interaction between shell and tubes, the only way to do this reliably is to use detailed modelling to accurately quantify heat transfer at all points throughout the reactor.

Accurate quantification of the heat transfer throughout the reactor requires a hybrid modelling approach, which considers simultaneously:

The approach is shown schematically in Fig. 4.

LG Chem chose to work with Fluent Inc.’s Fluent® and gPROMS, based on previous experience with the two companies and the PSE AML:FBCR and Hybrid Multitubular products.

These contain first-principles models of the fundamental chemical phenomena shown diagramatically in Fig. 5, including diffusion of reactants and products between bulk fluid and catalyst and intra-particle diffusion. They also contain accurate relationships for internal bed heat transfer and bed-to-wall heat transfer.

The configuration of a two-dimensional single tube model was constructed from these tube sections as illustrated in Fig. 6.

Typically, multiple tube sections are used to model the different sections of catalyst and inerts along the length of a single tube. The effect of different catalyst profiles can be studied simply by varying the dimensions of the tube section models to determine the optimal loading. However this was not required in the TPAL reactor case, which uses a single catalyst throughout.

For accurate reaction modelling, it is necessary to determine the most accurate possible values for reaction kinetic parameters. This is done using gPROMS’ parameter estimation techniques with well-targeted experimental data.

For an MTR this is best done using a single catalyst-filled tube with good temperature measurement within the tube and in the surrounding cooling medium, with temperatures kept as close as possible to isothermal conditions.

LG Chem used the pilot plant experimental setup shown in Fig. 7, fitting the resulting data to a gPROMS single-tube model. This provided highly accurate kinetic constants that would be valid – because of the carefully-controlled experimental conditions – at all scales of operation.

Parameter estimation is a key activity, as the more accurate the parameter values, the better the predictive capability of the model, ensuring that it is capable of quantifying the effects of small but potentially significant changes to the design.

A single catalyst-filled tube is immersed in a well-controlled bath of coolant in conditions that are as far as possible isothermal. Temperature measurements are taken along the centre of the tube and in the jacket walls. Fig. 8 compares the temperature profiles (y-axis) along the tube center (x-axis) at different experimental conditions with the values predicted by the catalytic tube model.

For the TPAL case, a number of pilot plant experiments were performed in a single-tube fixed bed reactor, measuring process variables such as temperature profile along the tube center and concentration of each chemical species at two positions in the bed.

The first graph in Fig. 8 is for the thermal oxidation only case, and the second graph is for the thermal and catalytic oxidation case. As can be seen there is a good agreement between experimental and predicted values for all cases, meaning that the postulated reaction sets describe the observed data well, and the experiments performed were appropriate, resulting in accurate parameter values.

The combined gPROMS-CFD model was constructed using a total of 140 gPROMS “representative tubes” to represent key sections of the reactor bundle. It was then used for a number of cases.

First, the effect of catalyst layer height and the feedrate was studied to determine the optimal reactor height. Then the model was used to check whether there was any advantage in using a multistage shell structure. It was found that a single stage was sufficient for the required performance.

Finally, the detailed geometry of the 3D tube bank and baffle structure was determined by investigating many alternatives. Some of the variables evaluated are shown in Fig. 10.

Cases were performed by LG Chem engineers adjusting elements of the design geometry in Fluent; execution of the full catalytic reaction took place transparently in the background.

For the purposes of this article, results from a “poor” case and an “optimal case” are presented based on the reactor length and shell configuration determined in the first two studies. Values in results are normalized to preserve confidentiality.

Fig. 11 shows the velocity distribution of coolant through the shell in a vertical cross-section of the reactor. The velocity approaches a maximum around the edge of the doughnut baffle. In the poor design, the high resistance to the cross-flow passing through the narrow tube pitch limits flow velocities in the center of the reactor, causing performance problems in the reacting tubes in this region.

To improve performance while maintaining a reasonable coolant pump size, optimal values were determined for the size of doughnut baffle window and the inner tube limit. The optimal design shows a narrower window, forcing fluid through at higher velocity, thus improving heat transfer.

Fig. 12 shows the pressure distribution of coolant through the shell. The pressure drop across the optimal design is higher than that of the poor design because of the larger flow resistance caused by the narrower baffle window.

This clearly illustrates the benefit of accurate quantification. It also demonstrates that this type of analysis can be used to immediately exclude designs that require unnecessarily large initial investment and operational cost for coolant pumps.

Fig. 13 shows the distribution of heat transfer coefficient calculated from the flow direction and velocity of fluid at local positions.

Note that the three lowest lines (pink, blue and black, representing the two innermost and one outermost measure tubes, respectively) have moved significantly upward relative to the others, indicating a higher heat transfer coefficient.

Fig. 15 illustrates the effects of the above adjustments on the key design objective – the temperature distribution along the center of each catalyst-filled tube. The poor case has marked temperature gradients across the tube bundle for tubes in the same axial position.

As a result of the considered adjustments to the internal geometry, the optimal case shows virtually uniform radial temperature profiles.

A potential risk of not optimizing the design is the formation of hot spots, particularly near the center and wall at the reactor inlet.

This would decrease the total performance of the reactor and accelerate catalyst degradation and deactivation, eventually leading to the shifting of reactions away from their optimal regions in the bed, further loss of performance and possible early shutdown.

The detailed understanding of performance that can be gained from the results raises the possibility of running the reactor at higher temperature, if this is desirable to increase conversion. This is a decision that can be taken as required by operational staff, based on detailed quantitative information provided by the design team.

Subsequent to the main design work, it was found that performance could be raised further by improving coolant and feed distribution before entering into the reactor. The studies on distributors were initially performed using 3D CFD simulation, and then the full effects were evaluated by using the hybrid simulation as described here.

The detailed predictive hybrid model made it possible for the design team to rigorously quantify the effects of changes to key design variables on critical performance indicators such as the shell-side temperature profile.

This made it possible to explore many different design options for the TPAL reactor in a short space of time. The information from these cases was used to determine the final design geometry with high-performance characteristics as well as to provide design information such as the capacity for the coolant circulation pump.

For example, it was possible to investigate the effects of changes to the baffle geometry on aspects such as the temperature profile at various tube centers, tube wall heat transfer coefficients, temperature rise in the cooling medium, pressure drop in both shell and tube side, concentration profile of each chemical species along the tube, and final conversion in each tube.

It was found that some key performance improvements resulted from very small and subtle changes to the geometry – effects that would have been impossible to determine without a detailed model.

The optimal reactor design assures improved heat transfer efficiency leading to uniform performance over all tubes in the reactor, providing greater controllability and operational flexibility as well as extended catalyst life. It is also the most cost-effective in terms of initial capital investment and operating cost.

Besides its application in the design of new high-performance multitubular reactors, the hybrid modeling approach can be applied at a more general level to explore and prove innovative technology approaches in many different process areas.

The project resulted in a New Excellent Technology (NET) award from the Korean government, recognising the technology advances and their commercial importance.

It has also resulted in a number of patent applications for internal configuration and distributor designs for multitubular reactors. 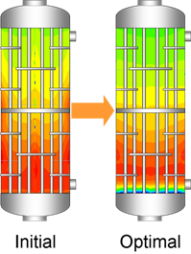 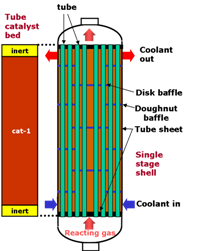 By designing reactors to have uniform temperature profile across the tube bundle it is possible to achieve:

Good design reduces the likelihood of hotspot formation and the consequent progressive catalyst burnout that results in early catalyst replacement. 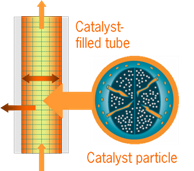 Fig. 6. gPROMS tube model configuration. Only a single grade of catalyst was used 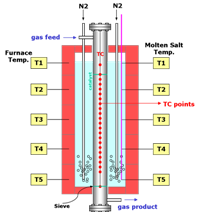 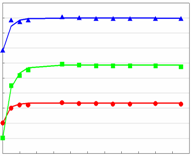 Fig. 8. Parameter estimation results – thermal reaction only (above) and thermal and catalytic reactions (below) 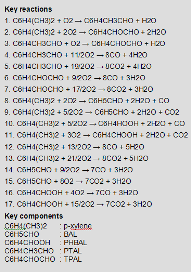 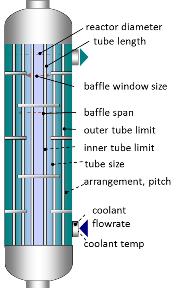