In the present work, a first-principles model of methanol partial oxidation to formaldehyde in an industrial reactor was developed and the reaction kinetic and deactivation parameters estimated, taking advantage of the temperature profile established by the exothermic reaction. The catalyst deactivation was assigned primarily to hot-spot regions in the oxidation reactor. The exposure to high temperatures enhances solid-state reactions that produce volatile compounds and a consequential loss of catalyst active compounds that migrate downstream from the hot-spot. This phenomenon was modelled implementing a new method where, instead of time, the deactivation was integrated as a function of the total consumed reagent until the instant of interest. This approach allowed computing the activity of the catalyst at any instant without needing to solve the model for the whole operating history until the pertinent instant; for simulating industrial reactors, where the operating conditions are changing frequently, this feature is quite relevant

Nice work illustrating the use of gPROMS for the modelling of an industrial reactor. 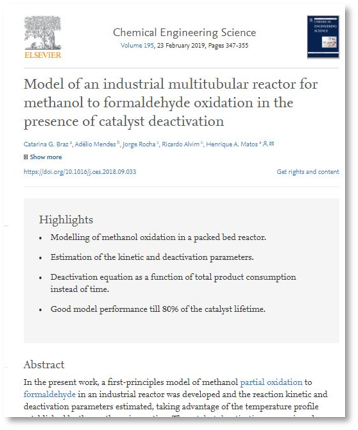