Statistical Associating Fluid Theory, or SAFT, is an advanced molecular thermodynamic method that can predict a wide variety of thermodynamic properties of mixtures accurately based on physically-realistic models of molecules and their interactions with other molecules.

Because of the accuracy of the underlying model, SAFT can predict the properties of many complex mixtures with an accuracy that has not been possible in the past.

Component and mixture properties can often be predicted accurately – especially by SAFT-γ Mie – even in cases where very little experimental data is available.

SAFT is applicable to virtually any vapour-liquid material system found within the chemical industries. However systems of particular interest to many companies include those that have proven 'difficult' in the past:

In particular SAFT allows for the treatment of systems with varying polarity, from the standard Lennard-Jones dispersion to highly polar interaction. General association schemes can be incorporated into the treatment.

The underlying model also allows for predictions are valid over a wide range of operating conditions. This is a particular advantage for systems where there is limited experimental data in the areas of operation being studied.

PSE has acquired the rights to commercialise the SAFT technology from Imperial College London, which is the basis of the gSAFT software.

gSAFT is available as an option within appropriate gPROMS® family products.

SAFT continues to be the subject of substantial ongoing research within the Molecular Systems Engineering research group of Imperial. PSE will bring new developments to the market within the gSAFT framework as they arise.

You can find out more about the theory behind SAFT-VR in the following references: 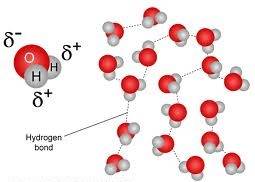 Hydrogen bonds cause H2O molecules naturally to cluster. This needs to be taken into account for accurate calculation of phase behaviour