The gPROMS Advanced Model Library for Gas–Liquid Contactors (AML:GLC) is a library of high-fidelity, non-equilibrium component models for gas-liquid separation.

It is provided as a set of building blocks that can be used to create virtually any configuration of separation device, plus pre-configured models of typical separation equipment.

The library is designed to cover a wide range of separation unit operations, including:

Using the AML:GLC, virtually any non-equilibrium separation device can be built from just five models, providing great flexibility and ease of use.

The AML:GLC models are completely compatible with the gPROMS Process Model Library (PML) that is supplied as a standard part of gPROMS.

How do AML:GLC models work?

The AML:GLC models model in detail the exchange of mass and heat between bulk gas and liquid phases via gas and liquid films separated by an infinitesimally thin interface (see diagram). Phase equilibrium conditions hold only at this interface. 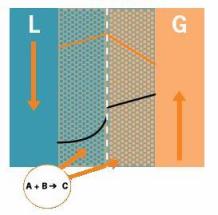 The approach avoids the major simplification of the traditional equilibrium approach – the assumption of equilibrium between phases – and thus provides a much more accurate quantification for optimisation of design and operations.

The multicomponent mass and heat transfer through the films are modelled using either Fick's law or the more rigorous Maxwell-Stefan formulation, which accounts for the "friction" between molecules of different species moving at different speeds and/or in opposite directions.

The AML:GLC is a toolkit of models, each of them implemented as a separate gPROMS MODEL entity. All models contain axial distribution, i.e. the properties of the material inside them vary continuously from one end (usually the top) to the other (usually the bottom).

An axially-distributed device with gas and liquid flowing countercurrently to each other, used for column packed sections.

The walls are assumed to be adiabatic. The liquid and gas enter and leave the system through four material ports.

Similar to the GLC_section_adiabatic, with the difference that the walls of the device are not adiabatic but allow heat to be exchanged with another device.

In addition to the four material ports relating to the inlet and outlet of gas and liquid, the model has a thermal transfer port

A model of a solid wall, the outer surface of which is adiabatic. The inner surface allows the transfer of heat along its entire length from another device connected to it via a thermal transfer port.

Heat conduction in the direction perpendicular to the wall surfaces is also modelled under dynamic conditions; at steady-state, this rate of conductive heat flux is zero.

A model of a solid wall, both surfaces of which allow the transfer of heat from other devices connected to them via thermal transfer ports.

Heat conduction in the direction perpendicular to the wall surfaces is also modelled.

A model of a spatially distributed device used for heating or cooling a material stream via heat exchanged through one of its surfaces.

The material to be heated or cooled flows through another device (typically a GLC_section_with_thermal_contact) via a thermal transfer port.

The AML:GLC component models can be interconnected to describe a wide range of columns of different configurations. There are two types of connection port:

Heat-Integrated Distillation Columns (HIDiCs) have great energy saving potential, but their implementation has been limited by the difficulty of proving operation in advance.

The AML:GLC is the first general-purpose capability for easy, accurate modelling of HIDiC systems.

The flowsheet (right) represents a heat-integrated distillation column process (left) for the separation of a mixture of benzene and toluene, with a small amount of ethylbenzene present.

The right-hand GLC section (representing the inner tube) operates at a higher pressure (orange) than the left-hand section (outer tube). The difference in pressure results in a difference in temperature which causes a heat flow through the conducting partition.

AML:GLC models access whichever physical property package is being used - for example, Multiflash - allowing them to handle any mixture the properties package can deal with.

In addition, AML:GLC requires information on species diffusion volumes, binary diffusivities for the liquid phase, and heat conductivity for the liquid and gas phases.

The AML:FBCR and Hybrid gPROMS-CFD Multitubular interface are licensed as options to gPROMS ProcessBuilder. They are not available under PSE's Academic Programme.

The AML:GLC can be used to model virtually any type of separator configuration